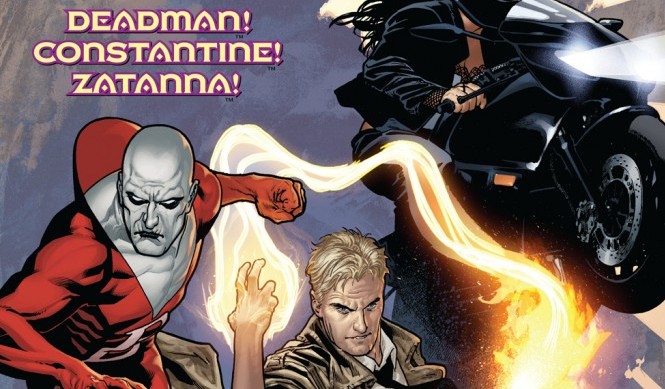 In the Dark Part Three: Shibboleths and Alcohol

The shifting winds of Justice League Dark continue to confound me. Thus far this macabre tale has gotten by on solid writing encased in a confusing and twisting narrative that dangles a slew of interesting characters in front of your face. Each issue has managed to navigate its large roster with a wonderful focus. Issue #3, while still sharply crafted, lacks that same narrative focus and thus leaves the reader feeling miffed about the direction the book is headed.

My primary gripe with Justice League Dark #3 is that it feels less like a cohesive plot and more like a series of short stories. There is the Deadman vignetter, the Shade vignette, the Constantine vignette and although they at times threaten to intertwine there is never a real tangible link with any of them. This also leads to the bigger question; whose book is this? At the beginning it seemed to be Zatanna’s, at times I think it’s Constantine’s and then out of nowhere I have to consider it may be Shade’s. I don’t mind playing with character placements but without a clear leader or organizer I don’t know who to get behind.

The frustrating thing is that those story vignettes are actually very well done. They all pose god conflict for our heroes and they work towards a better understanding of this team as individuals. Enchantress is a complicated villian whose character design is wonderfully twisted and grotesque. John Constantine is one a hell of a character. I get completely sucked in by his voice over which is part  Van Helsing part Sam Spade and I love the implied history between himself and Zatanna. I also continue to dig on Boston Brand a.k.a. Deadman; who in this issue goes beyond his snarky ways to show he has a lot of heart.

Buy It- Justice League Dark# 3 is an interesting book. I find the characters fascinating but I have major issues with the muddled narrative and lack of focus. Bottom line is I’m still interested in the end game so I still say its a buy.