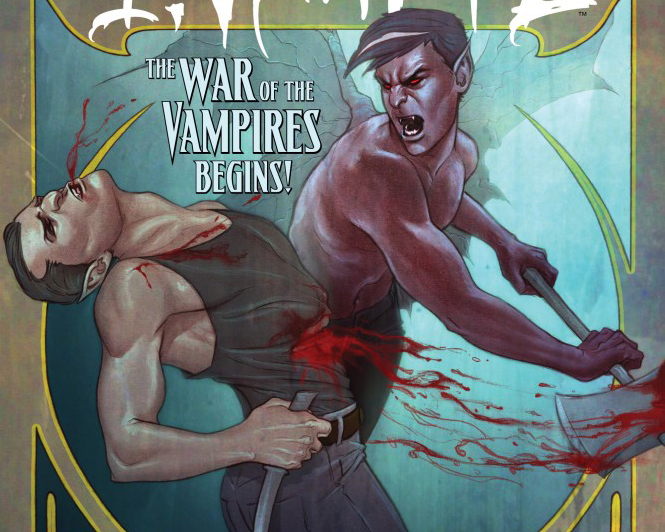 Right. So it looks as if I, Vampire is starting to crank the dial on itself, as this month we’re treated to some meaty back story and two new characters that add to this comics growing cast of “cool”. After a nasty battle with a menacing vampire horde we find our hero, Andrew, being nursed back to health by an old friend. I, Vampire may not be the fastest accelerating book of the DC New 52 but it certainly does know how to keep you interested. The artwork of Andrea Sorrentino is as gothic and gorgeous as ever and with the promise of moving the fight to a VERY well known location within the DC universe, it appears as if we’re about to see some major cameos and action.

What I really dug about this book was being afforded the opportunity to see how persuasive Andrew can be just by simply being himself. The people he meets (the ones that aren’t trying to kill him) cannot seem to help but be brought it by his vampiric charms and soon enough we’ll have a bad ass team of vampire hunters on our hands. This issue is essentially about the forging of new relationships within Andrew’s growing group of allies. With the promise of moving to another location, one that I’ve been excited for since issue #1 I am completely on board for another go inside this dark and twisted DC universe. While Andrew may not be the most charismatic of heroes, he certainly has an otherworldly quality about him that pulls me into his character. For such a dark figure he certainly seems to have his urges and priorities in check. Having to kill the one you love is never easy.

The DC Universe has gone to hell and hordes of the undead are conquering it city by city. Grab your stakes and garlic, it’s going to be a bloody bumpy ride.

Buy it. There’s a storm brewing and with the promise of moving the fight to a known and fantastic location this story can only get better.