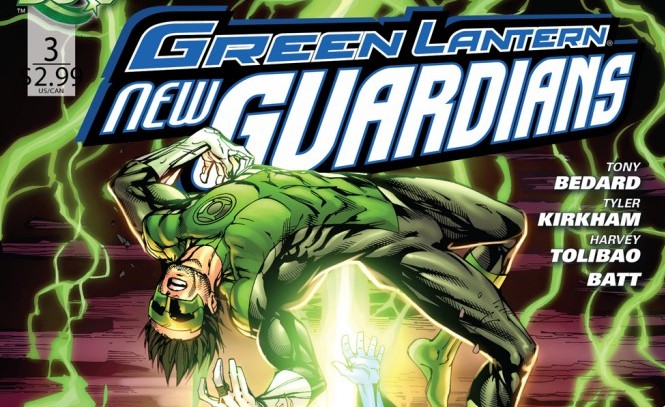 Ideas can be wonderful animals. They can rescue middling character work, sup par plotting and in fact a are the main line of defense for geeks like me defending bad sci fi.  “It wasn’t very good but I love the ideas it was playing with.”  The idea for Green Lantern: New Guardians is awesome. Take Kyle Rayner, my favorite Green Lantern, and construct a scenario where he is suddenly presented with the entirety of the emotional spectrum of power rings. Thus leaving him at odds with both the Corps members who want their rings back and the very institution he is supposed to belong to. The possibility for adventure and action is nearly endless. Alas, Green Lantern: New Guardians is a book that, despite a strong start, doesn’t cash in on any of its potential.

The story once again feels like all set up. There is plenty of action – some of it dynamic but most of it not – very little character development, and a plot twist that makes little sense to new readers of the Green Lantern books. I find this last nugget to be especially annoying and only serves to highlight the way the New 52 has been a somewhat disingenuous undertaking.  There are some books that have either started fresh, Supergirl, or made new readers feel welcome, Batman, but many have just seemed like weak attempts to cash in on a company wide movement. The Lantern books are especially egregious in this regard because they seem to still be fully steeped in all the continuity of their past.

I’m also highly disappointed in the art of New Guardians. The design of Kyle’s new costume is cool but the way in which he employs his powers carries very little weight and at times is unintelligible. Kyle is the most imaginative Green Lantern of the lot but here he simply shoots weird energy bolts at enemies. Oh yes and there is also the small point that none of the other Corp members have an ounce of personality. It all adds up to a book that isn’t very good but boy do I like ideas its playing with.

Skip It – I grow weary of the plodding plot development and poor choice of characterization. Maybe long time Lantern readers can get excited about the ending twist but I have no excitement for the issues to come.