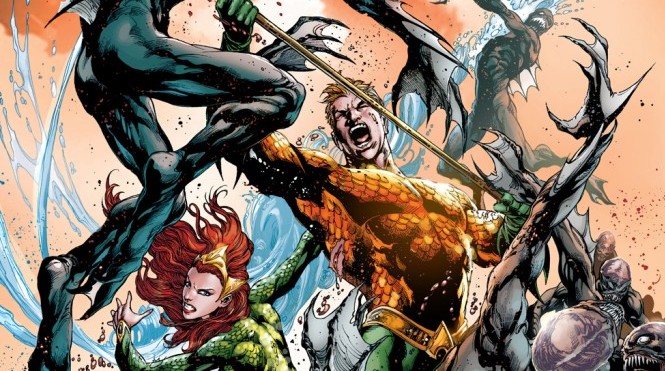 Geoff Johns promised to reinvent Aquaman in the New 52 and by all accounts he has been successful. The book is selling very well, the reviews have been positive and the character is back on people’s minds for the first time in a very long time. I’m quite happy with this resurgence because I think Arthur Curry makes for an interesting hero and I believe we can all benefit from other people than Batman being important in the DCU.  So, it’s with a heavy heart that I report that Aquaman #3, while still beautifully drawn, is a middling piece of writing that has all but squandered the good will garnered by issue #1.

Much like last month’s installment this issue seems content to either draw out pointless encounters or needlessly lounge around with it’s characters rather than further any sort of narrative. I know Johns has always said that character is more important than plot but by ignoring the momentum of his story he is hamstringing his heroes into nothing but facile bystanders. The one new character, a scientist obsessed with finding Atlantis, is an interesting addition but he also feels like someone from old continuity that we are supposed to have an opinion of. I don’t think this is inherently a bad choice but because of my lack of knowledge this new character came off as one note and flat.  I’m also now officially over the “isn’t it funny the people in Aquaman feel the same way the real world feels about him” stuff. You had me at hello Geoff Johns now you just have to work at keeping me through goodbye.

Skip It – Too much meta and not enough meat. Aquaman is still stunning to look at but I’ve grown weary of the self reference and stagnate plot.