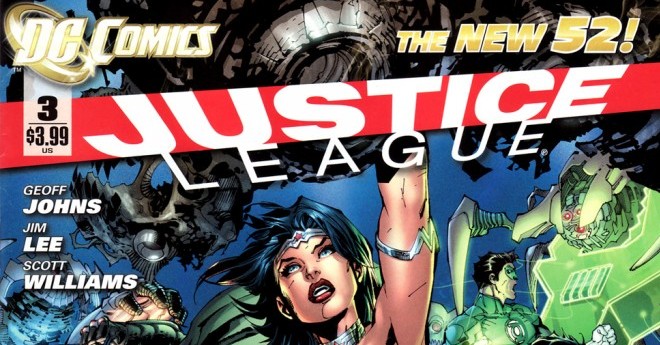 Justice League #3 is a book full of amazing action beats. Superman uses a truck as a baseball bat, Wonder Woman skewers demons with her blade and Green Lantern’s constructs explode in flashes of brilliant green on every page. In fact there is a breadth and scope to these set pieces akin to a Michael Bay Transformers film. Unfortunately like the action in Mr. Bay’s films the superhero violence in Justice League is gorgeously rendered but vapid.

Jim Lee’s art is again top notch and Geoff Johns writes high octane with the best of them but there is too much put into how these heroes fight and not enough of why. If you asked me, gun to my head right now, why the Justice League is fighting, other than the fact that there are enemies in their face, I honestly couldn’t tell you. The only sense of purpose to the issue seems to be the Cyborg origin. Here Johns forgoes global circumstances for a simple story of a father trying to save his son and it’s in this small moment that the book finds its only pathos.

Skip It – I’ve given this book a buy purely on faith in its creative team but that faith is starting to wain. Great action much like great comedy or drama comes from emotional resonance and Justice League is a book lacking in any at the moment. Give me a reason to care about these characters other than the fact that they are these characters.

Well, it’s that time of the month. No, not that. Gross. So yeah, it’s time for another action packed issue of the Justice League. All sorts of hell has broken loose, Wonder Woman is finally here, and we’re going to start this issue off with a bang by … watching Wonder Woman marvel over an ice cream cone? Alright, so that’s not the entire book but let’s see what we’ve got here: beautiful art, the assembly of all these great heroes, and everywhere we turn we’re staring right in the face of danger … my question is, why? Yes, Darkseid is behind all the madness, but who are our heroes? If this is supposed to be a relaunch, introducing us to our characters with a fresh set of eyes, I’d like to know what we’re fighting for.

I’m not so sure that each member of the team needs their own introductory issue. I feel like we could introduce the rest of the team rather quickly and perhaps start telling the reader why the cities are under attack. What does Darkseid want? Is it as simple as him just wanting to mess with everyone’s day, or is there a more sinister purpose that lies within events of these dark days? As much as I’ve enjoyed Justice League over the past few months I feel that this has been the weakest issue of the lot and I’m hoping that perhaps we can move past the formalities of shaking everyone’s hand and perhaps move into the meat of the story. Here’s hoping that next month’s issue starts the trend of exploring a more solid story arc rather than just showcasing how the heroes kick ass.

Check it out first – Obviously there is a lot of talent behind this arc and I’m sure there are lots of surprises planned. However, I’d like to maybe have the proverbial ball get to rolling a little bit faster if you catch my drift.