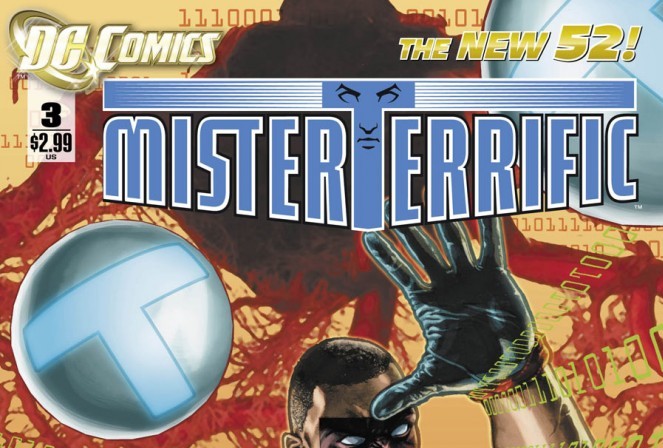 One thing I love about a great Sherlock Holmes story is that Doyle gives the reader all of the facts before Holmes sweeps in and solves the mystery by rearranging the pieces we’ve already seen in a way we couldn’t imagine. Doyle was genius enough in his writing to filter everything through Watson, an every-man who seems to think and reason as we do, only to have Holmes elevate and educate Watson (and us) to work out a solution.

For Mister Terrific to be the supposed third-smartest man in the world I expected more a little more Sherlock and a lot less Scooby Doo. In Issue #3, we have the showdown the rest of the series has been leading up to (I guess) with Terrific versus Brainstorm, who has the ability to take-over and consume everyone’s mind. To make a short story short, Terrific defeats Brainstorm (shocker!) by a means you will never be able to piece together for yourself, and only afterwards does Terrific explain through scientific nonsense how his superior intellect was able to overpower such a villain.

This “tell-me” style of story-telling is bullshit. Any momentum that might have been built up in the climax is evaporated. Moreover, by bringing in devices never introduced earlier in the story, the reader is cheated out of participating in the outcome of the story. For Scooby Doo, “the ghost was the janitor the whole time for no reason whatsoever” kind of story-telling is endearing, funny and forgivable. For Mister Terrific, this narrative made me feel like Wallace and his team has no trust in the intellect of their readers and feels grating, enraging and ultimately unforgiveable.

Mister Terrific was a character I had never encountered before, but one I was open to enjoying in the event that there was a good book behind him. Unfortunately, what I read was a mish-mash of better books strung together by shoddy dialogue and insulting plot devices. I’m disappointed, but none-the-less thrilled to be giving this book a final “see ya later.”

Throughout this New 52 journey, Mister Terrific has exemplified everything I dislike about comic books: mediocre writing filled with clichéd dialogue, characters pieced together from archetypes of better known (and better developed) heroes and nonsensical plot devices and developments that ultimately climax in nothingness. Skip the series altogether.