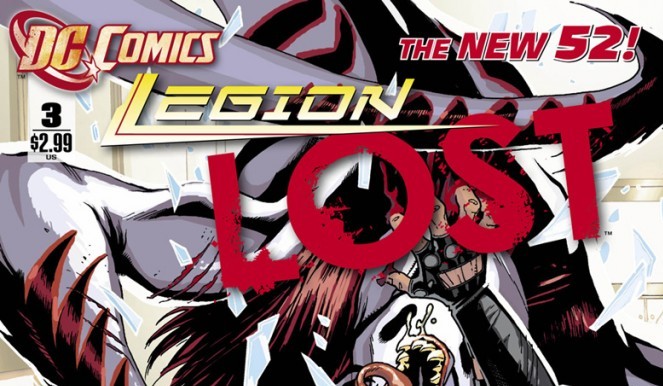 I’ve taken great pleasure throughout this New 52 experiment in reading terrible books with the anticipation of tearing them down in 300-words. In the case of books like Mister Terrific, Men of War and Red Hood and the Outlaws – and Legion Lost #1 – their terribleness became a sort of count-down to the event where I could drop them in epic fashion.

But then I shockingly liked Issue #2 of Legion Lost.

And also, though not quite as much, liked Issue #3. Is it weird that I’m disappointed in my intrigue in this series?

Sure, this classic Legion of Superheroes trapped in 2011 is a little too X-Men; Timber Wolf IS Wolverine, down to the surly dialogue and “lone wolf” persona; but the arch of the book is entertaining, thought-provoking and logically self-sustaining.

I am genuinely enjoying the character exploration of this group stuck in another time and how they’re individually coping with it. Moreover, the decision to center each issue behind a single character is an intelligent way for us to get to know these characters intimately – a device carried over from Issue #2 and one I hope continues (Legion of Superheroes should have taken note).

The reason why I wasn’t as crazy about this go-round is simply due to my lack of connection with Timber Wolf. Because he is so thoroughly Wolverine, my interest is not quite as peaked as it was while I was getting to know Wildfire. That isn’t to say there’s not cool stuff: the fight at the end of the book is particularly cool and if you look for it, a certain Man of Steel makes a little cameo in the early panels. There’s plenty to like in this series, and I, for one, am going to stick with it for the time being.

I mentioned that I was disappointed in my enjoyment of this series…allow me to clarify. After a rambling opening installment, I expected to derive sick pleasure in tearing apart this book for a few weeks before moving on to books more to my interest. What I found instead was a series thus far well-designed and one I look forward to continuing. I’m as shocked as you are, but I say “buy it!”