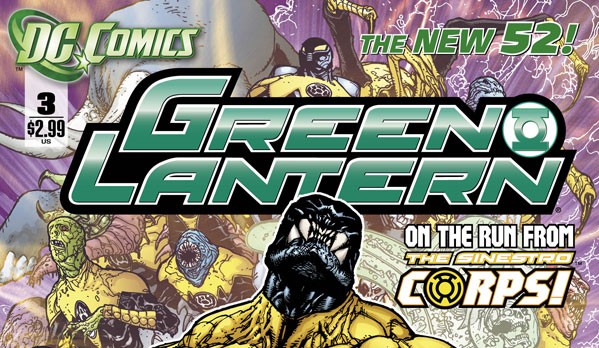 In the premiere issue of Green Lantern, we get a split perspective and set-up story. In its follow-up, we learn a bit more about why Sinestro is doing what he’s doing and get treated to a nice action setpiece. This issue? Whoa.

Johns & Co. have outdone themselves with this offering. We get more of the same from Hal and Sinestro’s conversation, but it turns bigger and deeper than it has before, and there is amazing tension built between these two characters who so obviously hate one another. Sinestro’s plight, and thus his reasoning for giving Hal the ring, are completely justified in my opinion. They argue and it seems real to me — there is never any question that these characters speak this way or have these feelings.

Once the decision is made to go off-planet and rescue Sinestro’s enslaved people, it really gets intense. I won’t say much more about the plan, but that aforementioned tension (I didn’t mean for that to rhyme, honest) gets amped up tenfold, and the results are not pretty.

The action and character are all there, and Johns has really shown that nobody other than him can write Green Lantern quite this way.

Buy it – it is important, however, to have read the previous issues.