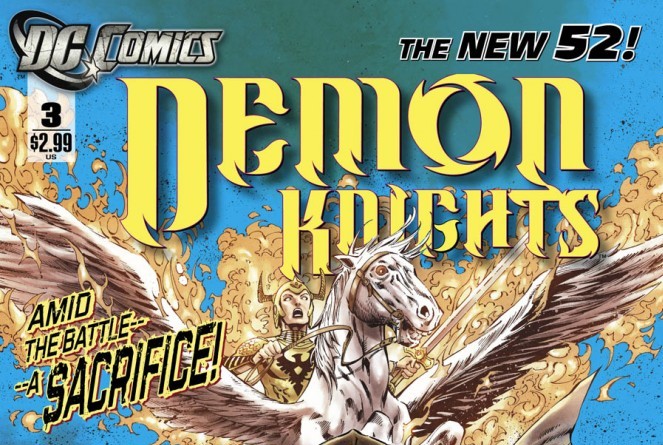 Last month’s Demon Knights was a bombastic battle heavy thrill ride whose every character, panel and line were stuck squarely on eleven. This month writer Paul Cornell decided to slam on the brakes a bit.  So, instead of focusing on a huge encounter with dragons, demons and flying warriors he focuses on the preparation for a huge encounter with dragons,demons and flying warriors. This format allows for more character intense moments but brings into light the previously hidden weaknesses of the book.  Which for the first time has left me wanting more from Demon Knights.

The highest praise I have given Demon Knights in the past is its ability to establish its many characters amidst fast moving plot threads. What could be an overwhelming mish mosh has instead been a exhilarating thrill ride. In issue three there is finally some breathing room which leads to our first real quality time spent with these characters and yet I feel like I got less out of it than the previous installments. In fact it seems that the usual breakneck pace of the book shields a hard truth. That there are too many characters in this story.

Paul Cornell is very deft at communicating great personality in a quick and concise action beat.  The chaos of the battle scenes in past issues have provided an intense insight into the extremities of our team of warriors. But as the storm began to calm in issue three I found myself wishing that there were smaller groups of characters to care about and get behind. I don’t want the other heroes eliminated just make one or two the focal point of an issue so I get to know them better. I would be fascinated to read an entire issue about The Shining Knight, Vandal Savage or Jason Blood. Instead we get an unfocused narrative that jumps between no less than five characters and there just isn’t enough time given to any of them.

Wait and See – Demon Knights is a unique book that belongs on your reading list but this issue more than any of the others lacks focus. The cast of characters are interesting but while Paul Cornell excels at communicating personality in action he falls short in the quieter moments of the book.  One misstep is not enough to turn me off to the book entirely but this is definitely filed in the disappointment category.