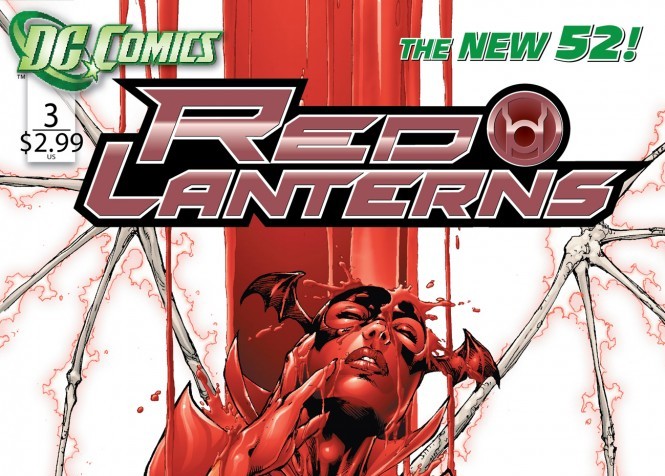 This will be my last time reviewing an issue of Red Lanterns. I found issue one to be trite, issue two showed signs of life but ultimately ended up an arduous read and issue three seals the stamp of poop with a story so devoid of purpose or character that I can’t wait to throw it in the trash.

Atrocitus may be fit to raz some space cops in a Green Lantern book but as the star of his own show he brings nothing to the table. He’s a one note and grating lead character who isn’t fit to have his own book. His goal in this issue is to awaken another Red Lanterns rational mind so he can have a partner in his crusade. The being he chooses is a female rage monster known as Laira. My hope was by adding a new speaking character to the mix that an emotional gradient would begin to appear in this book. I should have realized that I can not trust to hope for it is forsaken in these lands. Laira is just as angry and just as annoying as Atrocitus. Add to this the fact that there’s about 2 pages of plot in this 20 page book and you get a whole big pile of who gives a flying f$%k.

I will say that Ed Benes deserves credit for his brutal and interesting art. He’s the only saving grace of the entire mess that is Red Lanterns. I can’t stress enough how far you should stay away from this book.

Skip It- A horrible way to spend 2.99 stay away from it at all costs.