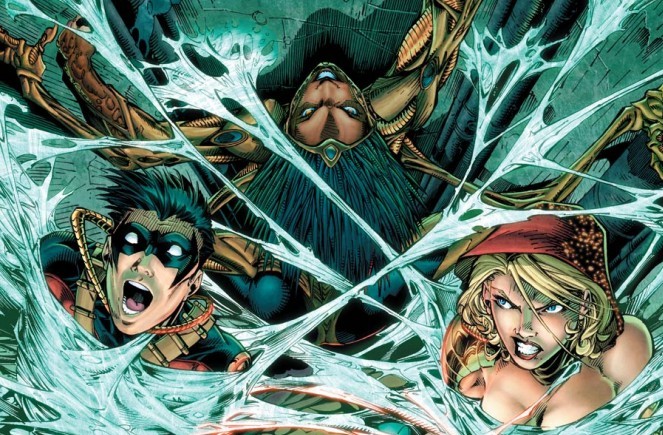 Teen Titans #2 is a curious beast. On the one hand, it follows the same formula as the first book: Tim Drake, aka Red Robin, is scouring the nation looking for super-powered teens to save/unite them against the forces of NOWHERE. But while the first issue was focused and precise – Robin only looking for and finding Wonder Girl – his search for the next super-kid seems cluttered. We have some scenes at Wonder Girl’s. Robin doing some re-con at a mall. Robin fighting/monologing with a NOWHERE agent(s). The reveal of Skitter, whooping on said NOWHERE agents. And all the while, making some fairly scathing commentaries about the state of America’s youth, the responsibilities of those with superpowers and lamenting the possibilities of some amour with Wonder Girl. In short, Lobdell writes enough here for two or three separate books, and as a result, this second issue feels a little bloated.

Also – yes, also – we get the continued side-story of Kid Flash, now imprisoned by NOWHERE, weighing his options of getting out and what to do with himself in the real world. Just as in the first issue, the Kid Flash stuff is kinetic, brilliantly drawn and compelling. I’m excited for him to join the Titans. Flash’s panels are a welcome reprieve from the (ironically) zipping story of Tim Drake, but they’re not enough for me…I wanted a good half a book devoted to him at this point.

Perhaps the biggest reason for my disappointment with this issue is the let-down of Superboy’s reveal. Between the introductory issue of Titans and the teases from the first two issues of Superboy, I expected Tim Drake to be squaring off or searching for the clone of Krypton, but instead we get one (singular) panel of Superboy using his Cerebro powers to hunt for Red Robin and Wonder Girl. I wish we didn’t even get the tease at the end of Issue #1 and this drawing had been a surprise rather than an expectation of much more.

While I’m far from writing off Teen Titans – I still love the art and characters of this series – I could go for a little more focus from Issue #3. Apparently, we’ll get our introduction to the final member of the group, but I’m hoping it’s a bit more than the shallow tease of Superboy. I say keep reading.