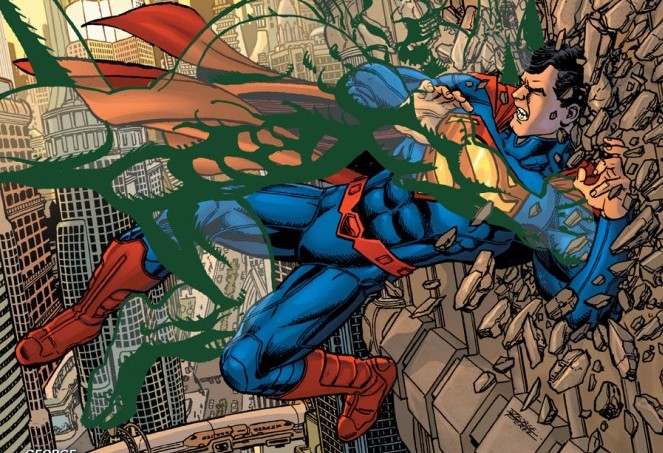 I made no bones about the fact that I though the premier issue of Superman was just no good. After reading two very cool, very different issues of Action Comics, I was left wondering why we needed another Superman-led series at all. Unfortunately, while the second issue is definitely a little better, a bit cooler, that question still remains.

We may be treading into monster-of-the-month territory here, but the invisible beast attacking Superman in this chapter is fairly interesting. Humans can see him, but Superman can’t. The fight was interesting, exploiting a weakness in Superman that I hadn’t thought about before – what if Superman was up against a creature that humans had more of an advantage over than the Man of Steel. Supes makes use of video in order to see the beast, and while this plot device was literally hammered in and overly dwelt upon, it’s cool, nevertheless.

While we’re thankfully rid of the obnoxious, omniscient narrator from Issue #1, we get an almost equally irritating narration by Superman throughout, which, we learn in the last pages, is Supes himself recording his experiences for…what reason? Who’s going to find the Fortress of Solitude? For whose posterity would these recordings be? The narration was bothersome enough to me, but I was scratching my head at this recording-reveal. It just doesn’t make sense!

The art is still not anywhere close to the incredible style of Action Comics, though present is a definite sense of inspiration in the battle between Superman and the invisible beast. I’m just still undecided if it’s enough to keep me invested. I’m still not all that sold on this pseudo-alternate reality where Lois is a media mogul, Lex is nowhere to be seen and Superman is more boring than usual. That said, this issue is definitely better than the first, and I’ll wait until the end of the next 20 pages before making up my mind to read any more.

This may be the most lukewarm recommendation ever, but this book could have been worse – it could have been a replica of its first issue – and does have a cool action sequence. I’m holding out my ultimate judgment for one more book…Superman deserves that much, right? Maybe not buy it, per say, but borrow it from a buddy and read it.