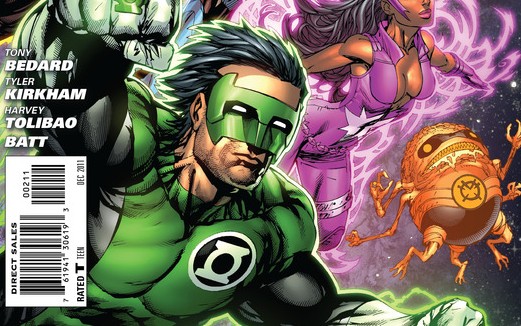 The concept of team up books, especially those featuring obscure characters, seems an odd choice for so early in the New 52.  There are some, Justice League Dark and Teen Titans, that pull it off by slowly bringing our heroes together one by one. Then there is Green Lantern: New Guardians #2 which forgoes this tact and instead has decided to slam together all our players at one time.  I want to be invested in this rainbow Lantern Corp, with their visually arresting aesthetics and big personalities, but I’m just not. Then there is the issue of the storytelling. This issue feels all filler to me.  A construct of action beats and exposition to get us to a book ending event that, while cool, feels like it could have opened the issue instead of concluding it.  GL:NG has one redeeming factor. It’s main character.

In issue one Green Lantern Kyle Rayner was imbued with the spirit of  such great everyman heroes as John McClane and Nathan Drake. Thankfully none of that is lost here.  He’s still in over his head at every turn. Whether it’s taking on an oncoming subway train or a napalm spewing Red Lantern he performs every action with a “this is a bad idea” attitude that makes him incredibly endearing. The final panels are promising a unique adventure for Mr. Rayner and I’m happy to go on it with him. If and only if the story telling serves him better in the future.

Wait and See – Some fun moments are washed away by labored and slow storytelling. This is all about movie pieces into place. I like where it’s going but that doesn’t make this problems with this book go away.