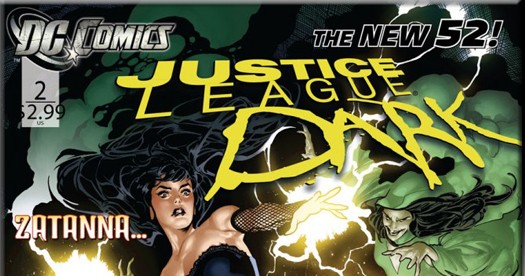 I don’t always know what’s happening in the onyx world of Justice League Dark. It contains a gallery of mysterious heroes, a twisting nonlinear narrative and a bevy of cloudy character motivations. Yet, Justice League Dark is a beguiling, sometimes confusing but ultimately well crafted book that should be on everyone’s reading list.

Sharp writing can be the most powerful opiate in the world and Peter Milligan is dealing out the dope in large doses.  There is a Tarantino like story structure being employed in JLD #2 with many of  its scenes take place during the events of last month’s book.  On the surface this may seem confusing but it actually helps to clarify and re-frame previous story beats while leaving the door open for future craziness.  The team is still scattered but I’m getting a lot of pleasure learning about each of heroes individually. This month is a lot of Deadman and I have to say I enjoyed his story immensely. He’s a character I’ve never read but I’m now a fan of his particular brand of snarky humor.

There are still plenty of things about Justice League Dark I don’t understand. But I have this sneaking suspicion that I’m not supposed to. Every character is so unique that I actually have no idea how they will interact as a team and that’s a refreshing feeling. If the creative team of Milligan and Janin can catch all the balls they currently have in the air and land this story I’ll be a happy happy man.

Buy It – If you are a fan of the supernatural, the magical and the macabre this mysterious tale is worth your money.