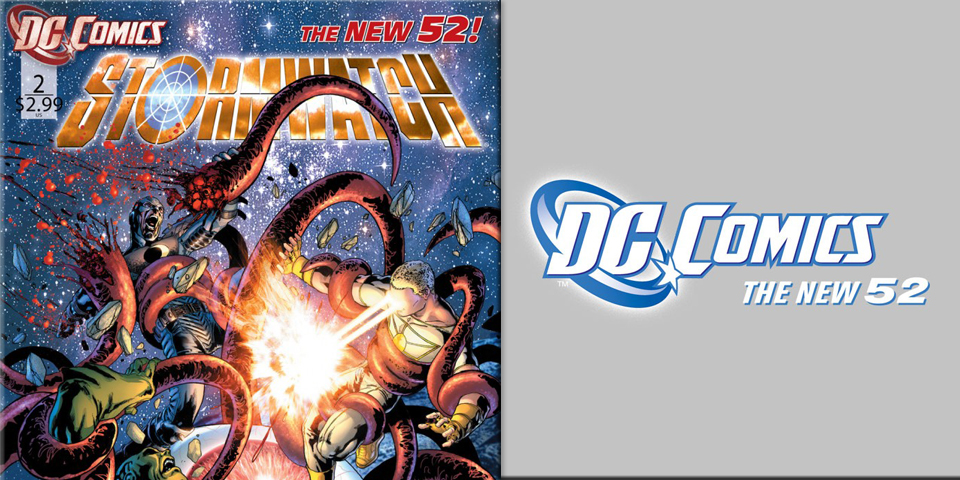 Title: The Dark Side Part Two

So here we are at Issue #2 of Stormwatch and I am still finding myself completely torn on this series. I think there might be too many things happening all at once for me to really be committed to any one thing going on in this story. It’s not that I can’t follow the events, I’m just finding them a little muddled is all. One thing that has bothered me about this series from the very beginning is the way the characters interact with one another. There are times when playful banter and slang really works for a group dynamic, but in Stormwatch, much of the way the teammates speak to one another just feels inappropriate and rather odd. Also, the time spent on trying to recruit this Apollo guy could be much better utilized to, I don’t know, stop the moon from growing claws and creating celestial shifts that are now hurling asteroids at the Earth?

The Stormwatch series so far really isn’t my cup of tea. However, the book does have some rather excellent coloring Alex Sinclair going for it, as well as some beautiful outer space scenery provided by Miguel Sepulveda & Al Barrionuevo. At the very least, since I’m not all too invested in the story aspect of the book, I do really enjoy looking at its pages and seeing what transpires on the moon’s surface. For what it’s worth I think the “moon” scenario is rather cool, and the conversations between Harry and our resident evil entity are probably the most engrossing thing about Stormwatch so far.

WHAT DO YOU NEED TO KNOW

Since this is a Part Two issue you are sure to need issue #1 to know what the hell is going on. Also, be aware that the new Superman #1 coincides with this series as well.

Wait and See – For real, there are just better books in The New 52 to pick up. But, that said, if grouped superheroes are your thing and you like outer space scenarios then certainly give this a quick read and try it out to yourself. While I’m not saying to run out and by this one I’m certainly not dismissing it entirely just yet.