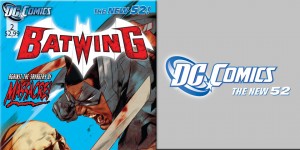 I know I’ve already gone on about the art of Batwing in my first review, but the art style is undeniably incredible. The photorealism of the design is perfection and a wonderful decision. It makes the African setting much more real than other books that take place here and really give weight to every look, every scene and every piece of action. A character losing his arm is a striking visual, and it impacted me much more than seeing the Green Arrow shoot a projectile through the hand of a baddie in that book’s neo-classic-comic styling.

But this book is more than just its style. Given the stories frequently heard on the news about militant regimes in unstable African nations, a villain whose goal is to spread murder and devastation across this setting is a relevant one. Massacre is still on a murderous rampage, and with David barely alive after Massacre ran a machete through him in the conclusion of #1, there’s no Batwing to stop him. Or is there? Massacre is a great villain. He proclaims his power is death in one of the most dramatic panels of the issue and hearkens back to classic Batman villains like the Joker, whose “power” is to cause chaos. He’s an undeniable force and one worthy of our attentions. But what we wind up with by the end of #2 is a hero in Batwing who unquestioningly sacrifices himself to stop this madman and save as many lives as he’s capable of. I, for one, can’t wait to see their showdown.

The art is worth the price of admission, but this is a Batman book that is more than just a photocopy of Bruce Wayne’s adventures. I find myself drawn to David/Batwing independent of my love of Bruce/Batman…what else could you ask for in a spin-off?