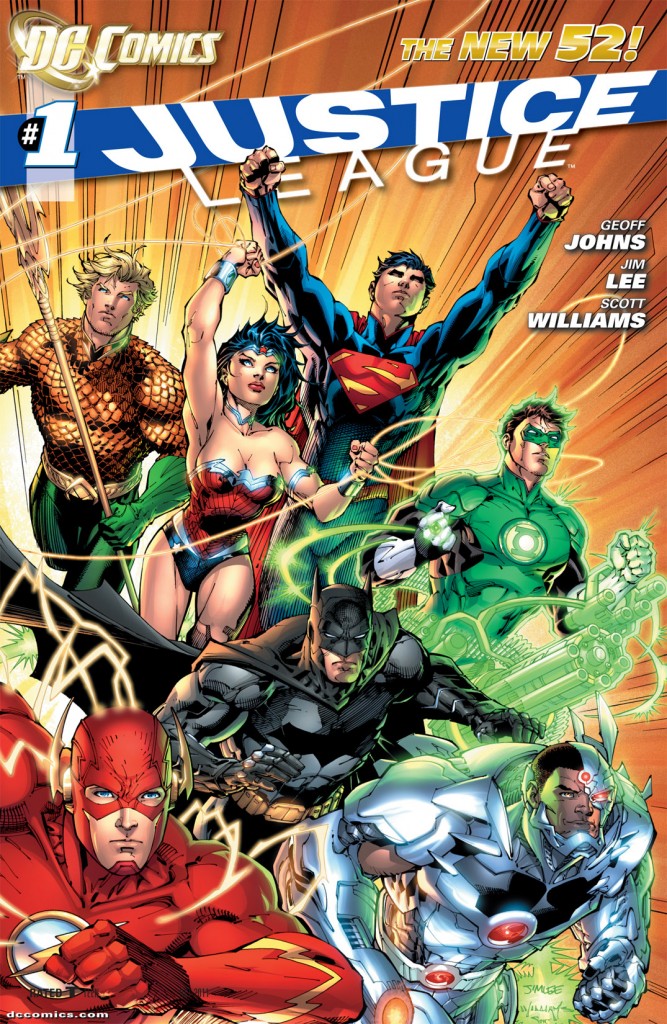 Justice League is one of those rare cases in entertainment where a companyʼs biggest property is being helmed by its industryʼs most esteemed and lauded creators. This is without a doubt the summer blockbuster of the DC new 52 and commercially Geoff Johns and Jim Leeʼs ﬂagship book is all ready a stunning success. But does this reboot
live up to the hype?

The answer in short is – Sort of.

Set 5 years in the past, Justice League #1, tells the tale of a world where superheroes are new, Batman is on the run and none of the League are aquatinted. Johns has chosen to use this issue to give us the ﬁrst meeting of The Dark Knight and The Green Lantern and the banter and bickering between the two characters is the highlight of the book. Johns has an obvious ﬂare for writing Hal Jordan who is more cock sure and arrogant than ever here. He also manages to illustrate, in one very short scene featuring Halʼs ring of power, Batmanʼs supreme intelligence.

To say Jim Leeʼs art is beautiful, kinetic, and interesting is like saying “Hey this Steven Speilberg movie has good special effects!” It is a forgone conclusion that Lee will bring it but it is never good to ignore excellence just because its consistent. So, yeah, its excellent. I am amazed that he can all at once make a panel incredibly busy and perfectly simple to understand. Itʼs the mark of a true master.

Geoff Johns is one of my favorite comic writers and everything he does in this issue is solid. Its just not spectacular and I couldnʼt help wanting more. Justice League #1 feels like the ﬁrst part of a ﬁrst chapter, a cold opening before the credits of a TV show or the prologue to a ﬁlm. All of that being said I have absolute faith in this creative team and will stick with them for the inevitable satisfying conclusion.

Next to nothing. This is the beginning of superheroes, the Justice League and an all new DC Universe.

VERDICT
Buy It-The creative team is too good to let us down. This book will pick up steam and you will want to be along for the ride. The worst thing that will happen is you will get to
take in some outstanding artwork.